On this day, we remember that sometime between sundown on Thursday and and sunrise on Friday, Jesus was arrested and tried by the Jewish authorities.  The sad irony is that the eternal High Priest who is Jesus Christ was rejected by the Jewish High Priest Caiaphas.

57 Those who had seized Jesus led Him away to Caiaphas, the high priest, where the scribes and the elders were gathered together. 58 But Peter was following Him at a distance as far as the courtyard of the high priest, and entered in, and sat down with the officers to see the outcome. 59 Now the chief priests and the whole Council kept trying to obtain false testimony against Jesus, so that they might put Him to death. 60 They did not find any, even though many false witnesses came forward. But later on two came forward, 61 and said, “This man stated, ‘I am able to destroy the temple of God and to rebuild it in three days.'” 62 The high priest stood up and said to Him, “Do You not answer? What is it that these men are testifying against You?” 63 But Jesus kept silent. And the high priest said to Him, “I adjure You by the living God, that You tell us whether You are the Christ, the Son of God.” 64 Jesus *said to him, “You have said it yourself; nevertheless I tell you, hereafter you will see THE SON OF MAN SITTING AT THE RIGHT HAND OF POWER, and COMING ON THE CLOUDS OF HEAVEN.” 65 Then the high priest tore his robes and said, “He has blasphemed! What further need do we have of witnesses? Behold, you have now heard the blasphemy; 66 what do you think?” They answered, “He deserves death!” 67 Then they spat in His face and beat Him with their fists; and others slapped Him, 68 and said, “Prophesy to us, You Christ; who is the one who hit You?” (Matthew 26:57-68, NASB)

He was the leader of the leaders of Israel’s religion, the priest of the chief priests.  He was the High Priest, the representative head of the people of Israel before God.  In fact, it was him and him alone who was permitted by God to enter the holy of holies, which he did only once a year on Yom Kippur, the Day of Atonement.  Each year on that day, wearing his gorgeous priestly vestments, he would enter the temple before all the people, representing all the people, and then go into the holy of holies alone.  There he would make expiation for the people of Israel by sprinkling the blood of the sin offering on the mercy seat and offering up incense.

This man most likely knew the Old Testament like the back of his hand.  Added to that, he knew the traditions of the rabbis, the scribes, and the Sadducees, which was the sect he was from.  But even with all that said, he was blind.  Caiaphas was blind—miserably, terribly, inexplicably, inextricably blind. 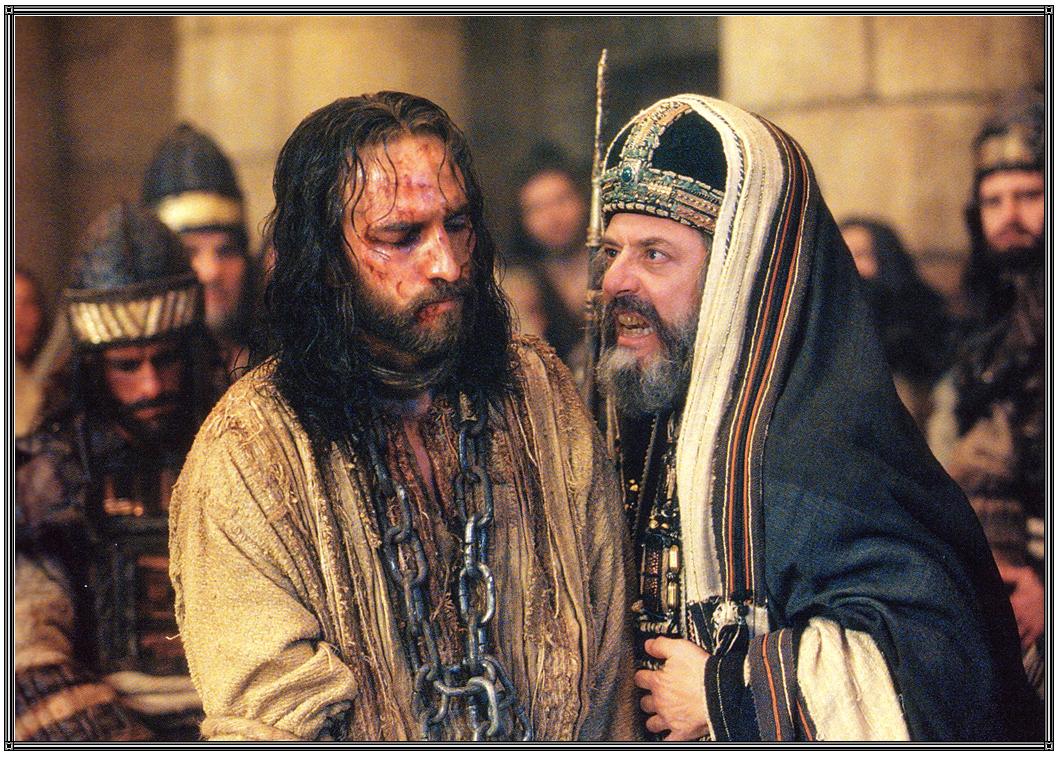 After Jesus was betrayed by Judas and arrested in the garden, his captors brought Jesus before Caiaphas, the chief priests, and the whole Jewish court called the Sanhedrin.  They tempted many there to lie against Jesus so that they could do what their hearts so wanted to do, which was to put Jesus to death.  Many liars and perjurers came forward, but the allegations were insufficient.  Finally, two stepped forward, saying that Jesus had said, “I am able to destroy the temple of God and to rebuild it in three days.”  Indeed that was a lie for Jesus had said, “If you destroy this temple (referring to His own body), in three days I’ll raise it up,” (John 2:19).  Nevertheless, Caiaphas accepted the accusation and turned to Jesus, “What do You say to this?”

Caiaphas continued, “I charge you under oath by the living God to tell us if You are the Christ, the Son of God!”

Jesus responded, “You have said it yourself; nevertheless I tell you, hereafter you will see THE SON OF MAN SITTING AT THE RIGHT HAND OF POWER, and COMING ON THE CLOUDS OF HEAVEN.”

At this point, Caiaphas should have leapt for joy, screaming, “He’s here!  The Messiah’s here!  The Son of God has finally come to us!!”  But he was blind.  Instead, he tore his clothes as a sign of rejection and grief, screaming, “He has blasphemed!  What’s the verdict?”

The Sanhedrin responded, “He deserves death,” and then they all spat in His face, beat Him with their fists, slapped Him across the face, and mocked Him.

Oh the blindness of Caiaphas!

He would not see.  Even more though, he could not see.  Why couldn’t He see that Jesus was the Son of God?  The answer is that Caiaphas couldn’t see because God had not healed his blindness and opened his eyes.  In order to see that Jesus is the Messiah-Christ, the Son of God, God must graciously give you sight, as Jesus told Peter in Matthew 16:15-17, Jesus said to them, “But who do you say that I am?” 16 Simon Peter answered, “You are the Christ, the Son of the living God.” 17 And Jesus said to him, “Blessed are you, Simon Barjona, because flesh and blood did not reveal this to you, but My Father who is in heaven.”  1 Corinthians 12:3 tells us the same truth, Therefore I make known to you that no one speaking by the Spirit of God says, “Jesus is accursed”; and no one can say, “Jesus is Lord,” except by the Holy Spirit.

Dear one, as you scoff at Caiaphas, and rightly so, for his hard-heartedness and his blindness, I pray that you would marvel at the grace of God in your life.  If God had not graciously touched your heart and mind, you would still be saying with Caiaphas, “Jesus has blasphemed.  He deserves death.  Jesus is accursed!”

Glory to the grace of God!