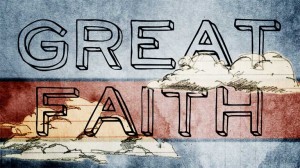 “Now faith is the assurance of things hoped for, the conviction of things not seen,” (Heb 11:1). Everybody has faith in something, even the most diehard skeptic. The question is whether or not that faith is in the right place and of the right amount.

What is the difference between the two? This question is important for us to answer because we want to be faith-full and not faith-less. In fact, it pains me to think that Jesus would turn to me and say, “Oh, you of little faith.” Yet, undoubtedly He could do so on a regular basis.

Did you notice the difference? The difference could be summarized in these three statements.

1. Little faith is stifled by fear while great faith is amplified by boldness. Peter shows us what fear does to faith as he doubted while walking on the water (Mt 14:22-33). He indeed started out boldly, but fear stifled his faith so that he began to sink. In contrast, the woman with the issue of blood boldly went forward and touched Jesus (Mt 9:18-22). She didn’t wait and ask. She boldly acted. The same can be said for the blind men who boldly cried out and followed Jesus uninvited into the house seeking healing (Mt 9:27-31) and for the Canaanite woman who broke all protocol and approached the Jewish Jesus, pleading for her daughter’s healing (Mt 15:21-28).

2. Little faith focuses on the material world while great faith focuses on the spiritual world. The audience Jesus was preaching to in Matthew 6:25-34 was prone to worry about material things such as food and clothing. Jesus tells them to seek first God’s kingdom and righteousness, which is spiritual. In a similar vein, the disciples who were caught in the boat in the storm could only focus on the water and the wind, the waves and the lightning, but there was Jesus asleep in the same boat (Mt 8:23-27). They were focusing on the material while He was focusing on the spiritual, in that He knew the Father was protecting them from the storm. Finally, perhaps the best example of this contrast is the disciples in Matthew 16:5-12. Jesus tells them to beware of the leaven of the wicked religious leaders, and they think He’s talking about actual bread.

3. Little faith makes decisions based on what is possible for humans while great faith makes decisions based on what is possible for God. That same conversation we finished the second difference with also illustrates this point. The disciples are worried about getting some bread but are forgetting that the One who just fed 5,000+ with five loaves of bread and then 4,000+ with seven loaves of bread was in their midst. Indeed, He could have turned stones into bread, but they were making decisions based solely upon what is possible for man. The same is true for the disciples when they tried to exorcise the demons from that boy (Mt 17:14-21). It seems that they were relying upon their own power instead of God’s. On the other hand, the centurion made his decisions based upon what is possible with God (Mt 8:5-13). In fact, he believed that Jesus didn’t even have to be in the presence of his son to heal his son, which was totally true. Only God can do that, and the centurion believed it. It is likewise with the men who brought the paralytic to Jesus (Mt 9:1-8). If they had focused on what humans can do, they wouldn’t have put forth the effort. However, they set their sights on what God can do and toted their friend to Jesus. In fact, we learn from Mark 2:4 that in order to get their friend to Jesus, these men had to tear a hole in the roof of the house Jesus was in because it was too crowded around the door. They weren’t going to miss what God can do!

So, in light of what we’ve seen here as we pursue great faith, I say to myself and to you: