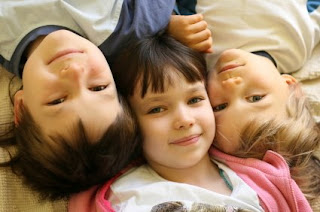 We are all familiar with the old nursery rhyme describing the differences between boys and girls:

Sure, it’s not science, but it’s true in so many ways. Yesterday we took our 3-year-old Zachariah to his favorite place—MacDonald’s Playland. Yeah, the food’s terrible, but who really goes there for the food? This playland is a tree house design, and Zach absolutely loves it.

We were there in the late afternoon so we had the playland all to ourselves except for one other family who had two little girls that were probably just a little bit older than Zach. They were playing while he finished up eating. As I watched them, I observed how sweet their play was—a lot of laughing, running, and talking. Zach soon finished up and began to play. He immediately wanted to make friends with them so he goes up to them and begins to pretend that he’s a ninja. Play punches and kicks flew through the air as he made sounds with his mouth. At first, the girls thought he was crazy. They looked at him and kind went their way, but he followed after them and demonstrated his karate skills again. This time they laughed and eventually began punching and kicking too. Zack soon turned around and hollered down from high up in the playland, “Daddy, I’ve made some new friends!” My wife Christy and I just cracked up.

The one thing that was so clear to me as I observed this whole event is the fact that boys and girls really are different. For a few decades now with the rise of feminism and the women’s rights movement, our society has really tried to downplay any gender differences. We would always here that differences are just a matter of nurture—we’ve conditioned boys and girls to act a certain way. But is this really true? Richard Laliberte points out in his article “Differences Between Boys and Girls” which appeared in the March 2006 issue of Parents magazine:

Parents have heard it for decades: Boys play with guns and girls play with dolls because society brainwashes them into rigid sex roles. Oh, really? Anyone who’s raised both boys and girls can tell you how different they seem from the get-go — and there’s not much you can do about it. When my wife and I wouldn’t give our son a toy weapon to play with, he made swords out of fence slats and guns out of Tinkertoys. Our daughter, by contrast, was always too busy managing the intricate social world of toy animals to have the slightest interest in hunting for anything. Was this subconsciously our fault?

Common sense has told us this truth for years, but as Laliberte points out, “It’s hard to argue with science, and evidence is mounting that male and female brains are simply not the same.” It’s not just anecdotal anymore.

Maleness and femaleness are not just flexible aspects of our life that we choose to take on. Rather it goes to the very root of our personhood. In fact, God’s glory is bound up in our different genders. Genesis 1:27 says, “God created man in His own image, in the image of God He created him; male and female He created them.” We as humans are made in the image of God, and part of the demonstration of this image is masculinity and femininity. We should glory in these differences and not shrink from them.

There is nothing wrong with different. However, when the contemporary mind hears “different,” it often hears inequality. One must be better than the other, they think. But this notion of difference is not biblical. The biblical idea of gender difference is grounded in complementarity. The root word in this view is the verb “complement,” which means to fill up, complete, or make perfect. The idea is that maleness and femaleness need each other to fulfill God’s goals for humanity. The genders mutually supply each other’s lack so that fullness is experienced.

So what is the purpose of all this talk? My purpose is as follows. Men, I pray that you celebrate your masculinity and strive toward its scriptural standard. Women, I want you to celebrate your femininity and strive toward its scriptural standard. In marriage relationships, I desire that you make every effort to complement each other through the roles God has given each gender in the Bible. Moms and dads, I hope that you work to raise your boys to be men who live out all that God meant for them in their masculinity and your girls to be women who live all that God meant for them in their femininity. In these efforts, we will truly find our happiness and God’s greater glory.

Gender is God’s design and blessing, and we praise the Lord that male and female are different!